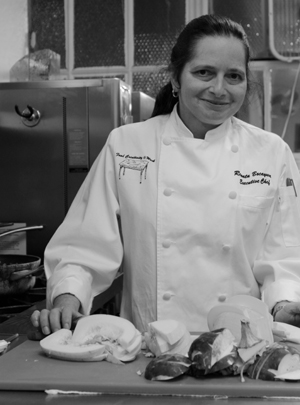 Renata Bocayuva
Chef Bocayuva has been engaged in the food industry for more than twenty years; eleven of which have been spent in Seattle exploring the foods of the Pacific Northwest. Her focus in the food service operations arena is on preparing unique and creative continental flavors, working on new product development, corporate and private catering, and in everything maintaining a strong emphasis on organic and sustainable practices within the local market.

She has spent years exploring and working with cuisines and cultures in more than eight countries. Highlights include her recently role as Product Development Chef for Culinex and EverGreen Culinary Solutions in Seattle, Washington and with Charlie Baggs, Inc. based in Chicago. Chef Bocayuva has owned and operated AKIB Consulting for the past five years and worked for Lowell-Hunt Catering in 1999. Renata has actively supported Seattle's FareStart and numerous local charities and culinary events. Chef Bocayuva has opened and managed restaurants in England (Plantation Inn 1987, Cafe Creperie 1988), Chile (Fiore 1991), Argentina (Kurtz 1992), Brazil (Lupo Di Mare 1993), Kenya (Brazil Tropical 1995), Rwanda (The American Club 1996), and the US (La Medusa 1997, Ipanema Grill 2005, Pintxo 2010).

She is fluent in French, Italian, Portuguese, Spanish and English. She attended Hotel Management and culinary school at Chelsea College, Worthing, England, graduating (1988) and is a member of La Chaine Des Rotisserie French chapter since 1986.

Renata and her husband Rob are high energy and love family meals with world travelers in their culinary home.